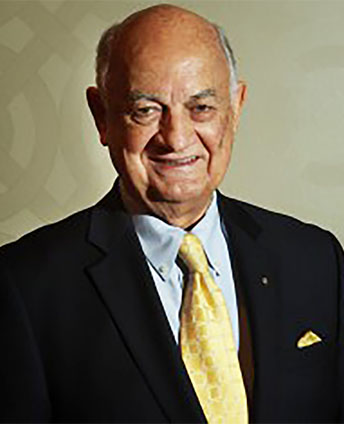 He has been a teacher, journalist, Army officer, school administrator, newspaper editor and publisher, author, community leader, university professor and dean of a university college of education.

Most recently the Dean of Education at Oral Roberts University and named by the university regents as Emeritus Professor in 1999, he is probably best known for his work as superintendent of one of Oklahoma’s fastest-growing school districts, Broken Arrow, where he was a school administrator for 30 years. He continues in volunteer adjunct professor status at ORU as a guest lecturer and serves on doctoral degree dissertation committees.

Prior to his long-time career in educational administration, Oliver had an extensive journalism career, including serving as news editor of The Watonga Republican, a historic western Oklahoma newspaper; managing editor of the Broken Arrow Ledger and six other newspapers owned by McWilliams Publications, Inc., and after retiring from the superintendent’s position in July, 1992, he joined Retherford Publications, Inc., as publisher of the Broken Arrow Scout and assistant to owner-publisher Bill Retherford, publisher of 15 other Tulsa area Neighbor Newspapers.

An avid student of history, Oliver was co-editor, contributing author and chairman of the editing committee for the Broken Arrow “Centennial Year” history book, Broken Arrow: The First One Hundred Years, a 2002 publication. Among his other history-related books are the 2004 published One from the Least and Disappearing Generation: A Memoir of a Depression-Era Kid, and Tony Dufflebag . . . and Other Remembrances of the War in Korea, released by the publisher in 2007. A new book, A Time of Peace, Season of Innocence, is a photographic history about young people growing up in a small town in Oklahoma in the 1945-1950 time span between the end of World War II and the beginning of the Korean War. That book was released in 2012.

Oliver also is author of the book, Ethical Behavior: A Guide for School Administrators, commissioned by the Cooperative Council for Oklahoma School Administrators (CCOSA). That book is distributed to association members and also is a supplemental textbook in some university graduate courses in school administration. A new book, Leading with Integrity, is scheduled for publication in 2015. That book also being prepared for the Cooperative Council for Oklahoma School Administrators (CCOSA) for distribution to association members and as a supplemental textbook in university graduate classes.

An award-winning documentary DVD movie, The History of Broken Arrow, a 2010 production of the Broken Arrow Historical Society, was based on a storyline by Oliver, who also served as a narrator for the movie. That DVD production received the Oklahoma Museums Association “Outstanding Educational Project” award in 2011.
Oliver served as an Infantry master sergeant in a front-line Infantry unit during the Korean War. He received a direct appointment as a second lieutenant, Infantry, in 1952, served in command and staff assignments in the 45th Infantry Division for almost two decades and another 10-years in U.S. Army Reserve assignments. His last military assignment was at the John F. Kennedy Center for Special Military Assistance, where he served as a Psychological Operations Officer with the 1st Psychological Operations Battalion, a Special Forces unit at Fort Bragg, North Carolina. He is a retired U. S. Army Infantry Major.

Oliver is an officer and member of several state, regional and national organizations and is active in church, community and civic work.

He is a former, long-time member of the Oklahoma State Board of Vocational-Technical Education, serving during the administrations of Governors George Nigh, Henry Bellmon and David Walters.

His community service activities includes being a member of Boards of Directors of several civic, business and professional organizations, including the Cancer Treatment Centers of America at Southwestern Regional Medical Center, Tulsa; serves on two executive committees of the corporate CTCA group, Boca Raton, FL; is a board member and Student Impact Committee chairman for Junior Achievement of Oklahoma, Inc., and a board member for JA of Oklahoma’s Tulsa Region. Oliver also serves as a board member for the Broken Arrow Community Foundation, Inc., Broken Arrow Historical Society Foundation, Thunderbird Youth Academy Foundation, former served as a commissioner for the International Christian School Accreditation Association (ICAA), member of the advisory council of Northeastern State University at Broken Arrow and the advisory council for the College of Education and Psychology of East Central University, Ada.

He was twice chosen as the Oklahoma Superintendent of the Year and represented the state in the American Association of School Administrators recognition program. In June 1999, the Oklahoma Association of School Administrators recognized Oliver for four decades of service to education with the presentation of the “Lifetime Achievement Award for Distinguished Service to Education.” Executive Educator Magazine twice selected him in the “100 Outstanding Educators of the United States and Canada” awards program. He was honored by the Oklahoma Chapter of the Teachers of the Year organization for the group’s “Vision” award in 2011.

A past-president of the Rotary Club of Broken Arrow and a Rotary International Paul Harris Fellow, Oliver has served in a variety of committee assignments with four-state Rotary District 6110, including more than 20 years as a member of the four-state District Scholarship Committee for which he served as committee chairman for five years.