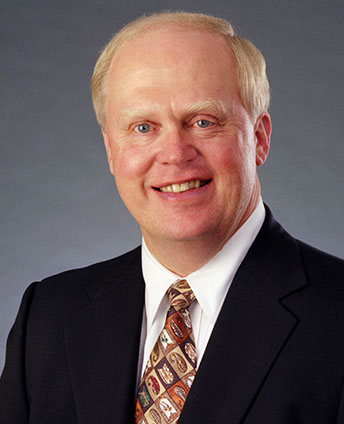 Gene Callahan, a native of Big Stone Gap, Va., joined the U.S. Air Force after his freshman year of college.

He served four years in the medical corps and as an administrative specialist at Keesler Air Force Base in Biloxi, Miss. The GI Bill helped finance his bachelor’s and master’s degrees in education earned at Virginia Tech.

As a young professional, Callahan worked with distributive education programs in Virginia and Alabama before accepting a research associate position at Auburn University, where he completed his doctorate in education in 1979. He then served as state DECA adviser and state supervisor of distributive education for the State Department of Education in Montgomery, Ala. In 1980, he joined the team that developed Francis Tuttle Technology Center in Oklahoma City. During the next few years, he served as Francis Tuttle assistant superintendent, interim superintendent and deputy superintendent.

In 1985, Callahan was named deputy superintendent of Tulsa Tech and three years later began his 20-year tenure as its superintendent and CEO. He implemented many new programs at the school, including pre-engineering, sports medicine, vision care, pharmacy technician, broadcast and sound engineering and television production. Under his watch, Tulsa Tech built the new Riverside Campus, Health Sciences Center and Sand Springs Campus and completed major expansions of the Peoria and Broken Arrow campuses. The staff more than doubled in size, from 212 employees to more than 460. Callahan worked 41 years in public education before his retirement in 2008.

His leadership skills were recognized far beyond Tulsa Tech. A graduate of Leadership Oklahoma and Leadership Tulsa, Callahan served as president of the American Vocational Association in 1991-92, chairman of the National DECA Board of Directors and board chairman for Junior Achievement of Eastern Oklahoma. He was honored with CareerTech’s prestigious Francis Tuttle Career Excellence Award and the Arch Alexander Award. He was named Executive of the Year by the Tulsa Chapter of Executive Women International, received the Key Contributor Award from The Oklahoma Academy and received the Paragon Award from Leadership Tulsa for exceptional community service. Post-retirement activities include serving on the board of directors of Junior Achievement of Eastern Oklahoma, the Oklahoma Aquarium Foundation, The Tulsa Tech Foundation and Friends of the Fairground Foundation.

Callahan is married to Ava Callahan, also a retired CareerTech administrator. He has two daughters, Cathy and Leann, and four grandchildren who live near New Orleans. He was also inducted to the CareerTech Hall of Fame in 2009.