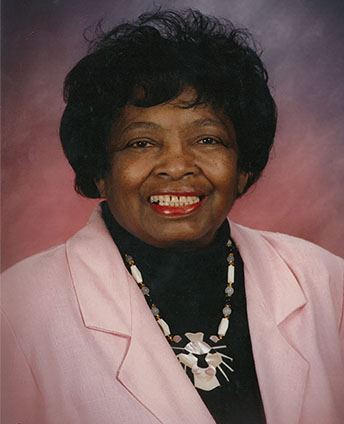 For the half-century that Lena Bennett was part of the Tulsa community, she was dedicated and steadfast in her efforts to improve the lives of others.

She used her special talent – her gift for getting things done – to benefit under-served populations, including underprivileged youth, minorities, the incarcerated, elderly and mentally ill. She was tireless in her efforts to improve the human condition and a champion for those in need.

Ms. Bennett began her career as Secretary to the Director of the Tulsa Urban League, where she witnessed, firsthand, the needs and issues facing Tulsa. Lena was instrumental in establishing the Margaret Hudson Program for pregnant and parenting teens and their families. This program has been recognized as one of the top five programs of its kind in the Nation and continues to serve students and families in the Greater Tulsa area.

For over twenty years, Ms. Bennett was a member of the Oklahoma Crime Commission, serving on both the Corrections and Juvenile Justice Committees. While on the Commission, she once went “undercover” as an inmate at a correctional facility to review routine intake procedures. The report that followed was instrumental in convincing the Board of Corrections to construct the Mabel Bassett Correctional Facility for Women, the first facility to serve the female population outside of the Oklahoma State Penitentiary in McAlester.

In 1992, Lena Bennett became the first African-American elected to the Tulsa Technology Center Board of Education, a post she held until her death in May of 2014. During her tenure, Ms. Bennett showed tremendous passion and support for the students and staff of the Childrens’ Learning Lab, an area whose Playground now bears her name.

Lena Bennett was a faithful member of Prince of Peace Lutheran Church for over fifty years, singing in the All Lutheran Messiah Choir for forty-five of those years. Lena earned her Bachelor’s Degree in Business from Clark College in Atlanta, Georgia and Master’s Degree in Family Relations and Child Development from Oklahoma State University in Stillwater, Oklahoma.

Lena was a mother, grandmother, community advocate, educator and friend. She was committed to a lifetime of serving and improving her community.