Mapping Her Path to a Second Chance 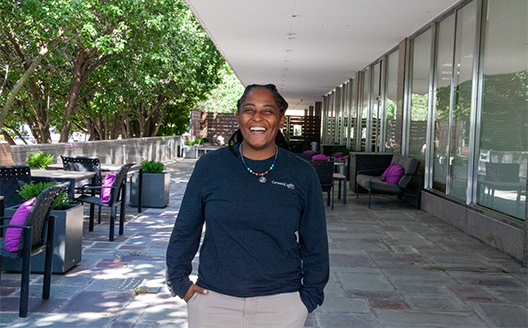 Adversity can be the thing that pushes you forward or holds you back. Tulsa Tech is here to help you move forward. Talk with graduate Sherry Johnson and she will tell you how going back to school changed her life.

If you are not looking for her, you might miss the five-foot dynamo. Johnson is part of a new company in Tulsa called Greenlight 360.

"We digitize existing buildings," Johnson said. "We use lasers to do architectural surveys; think of it as a 3D scan."

The laser scan allows Greenlight 360 to map entire buildings in seconds instead of the old way that would take weeks or months. For Johnson, the job is a direct path to her drafting training at Tulsa Tech.

"Everything that I am doing today is directly from my time in the Drafting program at Broken Arrow," Johnson said with a smile. "Every day, I apply the skills I learned at Tulsa Tech and use the relationship I built."

Johnson's path to Tulsa Tech was a bit bumpy at times. She made a misstep that landed her in prison, but after getting out, she set her sights on going back to school and finding a career she loved.

"I am 40 years old. Going back to school was not the easiest thing, but it is a testament to hard work," Johnson said.

As a drafter, she creates technical drawings that have exact specifications for each part of a building. Her time in the two-year, half-day or nine-month all-day adult program led her to the position.

"My job called my instructor, and he gave me a great recommendation," Johnson said while grinning ear-to-ear. "The crazy thing was I wouldn't have even known about the job if my instructor Mr. Doering hadn't told me. He handed me the job opening because he thought it would be a great fit."

A career in drafting opens many doors. New data from the U.S. Bureau of Labor Statistics shows drafters in Oklahoma earn an average of $43,000 a year. The outlook for the profession is stable, with many older drafters retiring. Johnson says after years in the turbulent energy industry, making a move to drafting was about stability.

As a project manager at Greenlight 360, she gets to travel the world to scan buildings, a privilege that is not lost on her.

"It is humbling," Johnson said. "Knowing all the things I have been through, being incarcerated, I appreciate what I learned. I have a job anybody would want."

"I get to meet amazing people, and who wouldn't love working with this technology," Johnson added.

Cutting-edge technology is finding a growing home in Tulsa and an ever-increasing workforce courtesy of Tulsa Tech's training.

"Tulsa Tech is a gateway to college. On your breaks, you can make good money and you can have a great chance to have the best work experience," Johnson said. “Tulsa Tech gives you a leg up because you can gain experience and the education."