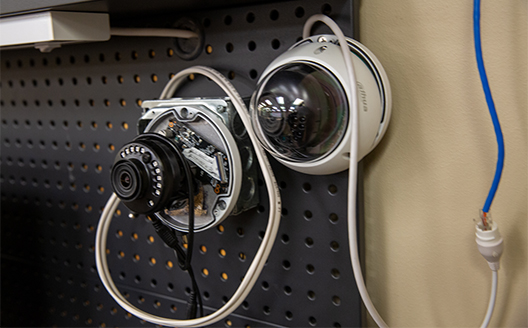 When you hear the word surveillance, you automatically think of cameras. However, today's systems are much more complex than merely a few cameras. Today's networks require a lot more technical background and for John Berry, Owner of Tulsa Surveillance Technology, Tulsa Tech helped point him on his path to success.

"Tulsa Tech gave me the hands-on training that I needed after college," Berry said with a grin. "I had the business side, but I needed to learn how it all goes together."

He came to Tulsa Tech after graduating with a business degree from Oklahoma State. His time in the Windows Server Administrator program taught him the hands-on skills to set up networks at every level.

"Through that class, I learned a lot of things about networking and networks at the basic level up to subsets, IP addresses, as well as the concepts around hosting and managing servers," Berry said.

The IT System Administration program is open to both high school and adult students, and takes as little as nine-months to complete. Successful students can start out as computer support specialists, earning around $50,000 on average according to the U.S. Bureau of Labor Statistics.

For Berry, he uses the knowledge he gained to start his own business, and while some think of surveillance as just a set of cameras, Berry is quick to remind you what it is.

"It is in the most basic terms, just a network until I attach a camera to it," Berry said with a smile. " Then, I can create a bigger, more meaningful system."

With more than 20 years of IT experience, Berry knows what it takes to run a successful network. In his fifth year of owning Tulsa Surveillance Technology, he says that his time at Tulsa Tech helped forge his path.

"Each person needs to learn their own path," Berry said. "If the class points you down the right path, it only makes you smarter and more fulfilled in what you are doing."

For Berry, his moment of fulfillment comes when helping the customer reach their goals with the perfectly designed system.

"I think the networking information is key. Anyone can just put up cameras," Berry said with a smile "What I try and do is educate the customer, so they understand the importance of the network, placement and camera type."

He says a lot of his success comes from the hands-on skills he learned inside the Tulsa Tech classroom and how to properly crimp a cable to set up the most high-end networks.