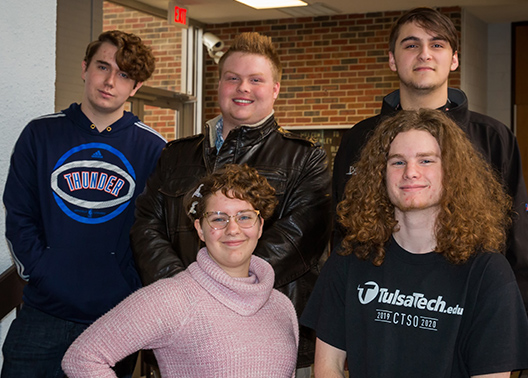 A new group is taking flight inside Tulsa Tech’s STEM Academy. This group of six students is competing on a first-of-its-kind team, in the StellarXplorers competition. The program designed by the United States Air Force puts students to the test, in a space design competition.

“Tulsa Tech is very cool because it gives us opportunities,” Alex Buckner, a senior at the STEM Academy, said. “I have always known I wanted to go into engineering but here I can explore the field and find out where I want to specialize.”

The StellarXplorers program launched in 2015. The U.S. Air Force’s goal was to develop a program focused on science, technology, engineering and mathematics (STEM). Now in its sixth year, this is the first year for Tulsa Tech to field a team. STEM Academy instructor Mark Rodriguez is leading the team of six students from all across the Tulsa Tech district.

This year the team has taken part in three competition rounds and multiple practice rounds. Each putting a new challenge before the team.

“They give us a scenario, the latest involved launching two satellites,” Buckner said with a smile. “We had to figure out what each rocket could hold which satellite and use the variables to decide which was the most cost-effective.”

The Tulsa Tech team is one of eight in Oklahoma, and more than 100 competing worldwide. Despite being their first year, they earned a spot in the national semifinals last March.

“We made it further than we could have ever dreamed,” Kegan Firey, a team member said with a smile. “We came into this knowing nothing and with the amazing support, we made it to the semifinals.”

“I did not expect us to get this far but it has been really cool,” Buckner added.

The team spends many Saturdays working on different practice scenarios, time together that has formed a bond between team members. Buckner spends his mornings at the STEM Academy while his other team members are in the afternoon group.

“It has given me a chance to meet new people,” Buckner said. “More than likely, if they were in my class I would not end up talking to them. We were thrown together and I like working with them, it’s fun.”

Not only is this competition setting students up for success, but it also gives them a leg up once they get to college. Careers in STEM are in high demand, expected to grow nearly nine percent over the next decade, according to the U.S. Bureau of Labor Statistics. This as the emphasis on STEM education in our elementary and high schools grows.

Tulsa Tech’s STEM Academy uses the nationally-recognized Pre-Engineering Program from “Project Lead The Way” to help give students a leg up. Each year, the program graduates about 100 students, and of those nearly 90 percent go on to pursue an engineering degree.

“It is really a collaboration exercise more than anything,” Joel DuBose, an Owasso senior said. “It’s about collaborating ideas in an efficient way because we do have a time limit.”

“The biggest part of it is the teamwork,” said Connor Meyer, another team member. “This program really shows how important it is to work together because you can’t always do it alone.”

For some, the program has made them re-think their career path and turn toward aerospace, but for Buckner, it has sharpened his desire to reach his goals.

“I would like to go get a degree in either mechanical or aerospace engineering,” Buckner said with a wry smile. “My dream is to work for NASA or SpaceX. StellarXplorers and Tulsa Tech are helping me reach that goal.”

Tulsa Tech’s StellarXplorers team ended up finishing eleventh in the competition. The team missed out on a top ten finish by just a tenth of a point. They also were able to claim the honor of the top finisher in Oklahoma.