We are Live! A Career Based on Love 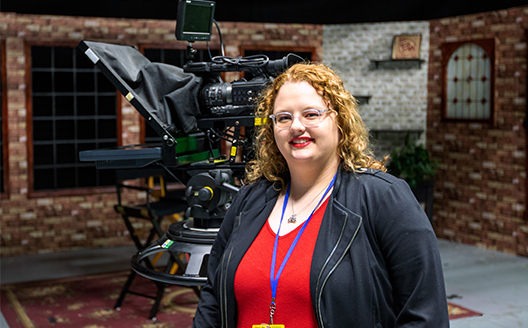 Welcome to a world of bright lights, flashing buttons, and green screens. You are not on a different planet, but in the Television Production I classroom.

While we are accustomed to images on our TV, behind the bright lights and glamour is a hard-working team. A team committed to making "TV magic." Brooc Simpson, an adult in the two-year TV Production program, is one of those dedicated people.

First-year students at Tulsa Tech learn everything from cameras to lighting, as well as the technical skills to put on an appealing broadcast. In comparison, second-year students craft the content. It all comes together in a show aired on the Riverside Campus called 91st Street Live.

The skills Tulsa Tech teaches and her instructors' connections helped Simpson get her job at FOX23 in Tulsa.

"I would not have the job I have without Ms. (Teresa) Piper. Ted (Gonderman) at FOX contacted her about a part-time position," Simpson remarked. "She came to me with the job offer, and we went from there."

Simpson wears many hats on the production team, so every day is a little bit different.

"In the studio, I could be running the teleprompter, graphics, or operating cameras," Simpson said. "You have to be adaptable and adjust because sometimes you could start on cameras, then go to graphics."

Simpson is not the only Tulsa Tech student or alumnus working at the local FOX station. She knows of at least a half-dozen others at the station. Her time there has given her a new appreciation for news and a profound affinity for the local teams.

"I feel like the local reporters, anchors and producers are part of our community," Simpson said.

That connection has also translated back to her classwork in the second year. Simpson has implemented many of the things she has learned by participating in news meetings at the station, for her shows on campus.

"Learning about the audience at FOX has helped determine who our shows are for here," Simpson said. "I now have a better understanding of what it means to produce a show."

While Simpson enjoys producing 91st Street Live, she plans to focus her career on the technical side of television.

"My favorite part is getting to work with cameras and the equipment," Simpson said. "One reason I love Tulsa Tech is the hands-on learning. There are many things Mr. (Richard) Walton has taught me that I probably would not have gotten in college."